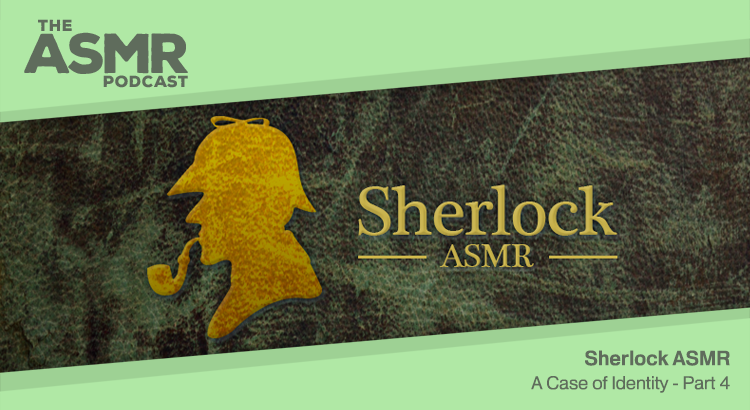 In Episode 68 of The ASMR Podcast we welcome back Sherlock ASMR, who continues his series of whispered Sherlock Holmes readings with the fourth and final part of ‘A Case of Identity’.

Mr. Windibank gave a violent start, and dropped his gloves. “I am delighted to hear it,” he said.

“It is a curious thing,” remarked Holmes, “that a type-writer has really quite as much individuality as a man’s handwriting. Unless they are quite new, no two of them write exactly alike. Some letters get more worn than others, and some wear only on one side. Now, you remark in this note of yours, Mr. Windibank, that in every case there is some little slurring over of the ‘e,’ and a slight defect in the tail of the ‘r.’ There are fourteen other characteristics, but those are the more obvious.”

“We do all our correspondence with this machine at the office, and no doubt it is a little worn,” our visitor answered, glancing keenly at Holmes with his bright little eyes.

“And now I will show you what is really a very interesting study, Mr. Windibank,” Holmes continued. “I think of writing another little monograph some of these days on the type-writer and its relation to crime. It is a subject to which I have devoted some little attention. I have here four letters which purport to come from the missing man. They are all type-written. In each case, not only are the ‘e’s’ slurred and the ‘r’s’ tailless, but you will observe, if you care to use my magnifying lens, that the fourteen other characteristics to which I have alluded are there as well.”

Mr. Windibank sprang out of his chair, and picked up his hat. “I cannot waste time over this sort of fantastic talk, Mr. Holmes,” he said. “If you can catch the man, catch him, and let me know when you have done it.”

“Certainly,” said Holmes, stepping over and turning the key in the door. “I let you know, then, that I have caught him!”

“What! where?” shouted Mr. Windibank, turning white to his lips, and glancing about him like a rat in a trap.

“Oh, it won’t do—really it won’t,” said Holmes, suavely. “There is no possible getting out of it, Mr. Windibank. It is quite too transparent, and it was a very bad compliment when you said that it was impossible for me to solve so simple a question. That’s right! Sit down, and let us talk it over.”

Our visitor collapsed into a chair, with a ghastly face, and a glitter of moisture on his brow. “It—it’s not actionable,” he stammered.

“I am very much afraid that it is not. But between ourselves, Windibank, it was as cruel and selfish and heartless a trick in a petty way as ever came before me. Now, let me just run over the course of events, and you will contradict me if I go wrong.”
The man sat huddled up in his chair, with his head sunk upon his breast, like one who is utterly crushed. Holmes stuck his feet up on the corner of the mantel-piece, and, leaning back with his hands in his pockets, began talking, rather to himself, as it seemed, than to us.

“The man married a woman very much older than himself for her money,” said he, “and he enjoyed the use of the money of the daughter as long as she lived with them. It was a considerable sum, for people in their position, and the loss of it would have made a serious difference. It was worth an effort to preserve it. The daughter was of a good, amiable disposition, but affectionate and warm-hearted in her ways, so that it was evident that with her fair personal advantages, and her little income, she would not be allowed to remain single long. Now her marriage would mean, of course, the loss of a hundred a year, so what does her step-father do to prevent it? He takes the obvious course of keeping her at home, and forbidding her to seek the company of people of her own age. But soon he found that that would not answer forever. She became restive, insisted upon her rights, and finally announced her positive intention of going to a certain ball. What does her clever step-father do then? He conceives an idea more creditable to his head than to his heart. With the connivance and assistance of his wife he disguised himself, covered those keen eyes with tinted glasses, masked the face with a mustache and a pair of bushy whiskers, sunk that clear voice into an insinuating whisper, and doubly secure on account of the girl’s short sight, he appears as Mr. Hosmer Angel, and keeps off other lovers by making love himself.”

“It was only a joke at first,” groaned our visitor. “We never thought that she would have been so carried away.”

“Very likely not. However that may be, the young lady was very decidedly carried away, and having quite made up her mind that her step-father was in France, the suspicion of treachery never for an instant entered her mind. She was flattered by the gentleman’s attentions, and the effect was increased by the loudly expressed admiration of her mother. Then Mr. Angel began to call, for it was obvious that the matter should be pushed as far as it would go, if a real effect were to be produced. There were meetings, and an engagement, which would finally secure the girl’s affections from turning towards any one else. But the deception could not be kept up forever. These pretended journeys to France were rather cumbrous. The thing to do was clearly to bring the business to an end in such a dramatic manner that it would leave a permanent impression upon the young lady’s mind, and prevent her from looking upon any other suitor for some time to come. Hence those vows of fidelity exacted upon a Testament, and hence also the allusions to a possibility of something happening on the very morning of the wedding. James Windibank wished Miss Sutherland to be so bound to Hosmer Angel, and so uncertain as to his fate, that for ten years to come, at any rate, she would not listen to another man. As far as the church door he brought her, and then, as he could go no farther, he conveniently vanished away by the old trick of stepping in at one door of a four-wheeler, and out at the other. I think that that was the chain of events, Mr. Windibank!”

Our visitor had recovered something of his assurance while Holmes had been talking, and he rose from his chair now with a cold sneer upon his pale face.

“It may be so, or it may not, Mr. Holmes,” said he, “but if you are so very sharp you ought to be sharp enough to know that it is you who are breaking the law now, and not me. I have done nothing actionable from the first, but as long as you keep that door locked you lay yourself open to an action for assault and illegal constraint.”

“The law cannot, as you say, touch you,” said Holmes, unlocking and throwing open the door, “yet there never was a man who deserved punishment more. If the young lady has a brother or a friend, he ought to lay a whip across your shoulders. By Jove!” he continued, flushing up at the sight of the bitter sneer upon the man’s face, “it is not part of my duties to my client, but here’s a hunting crop handy, and I think I shall just treat myself to—” He took two swift steps to the whip, but before he could grasp it there was a wild clatter of steps upon the stairs, the heavy hall door banged, and from the window we could see Mr. James Windibank running at the top of his speed down the road.

“There’s a cold-blooded scoundrel!” said Holmes, laughing, as he threw himself down into his chair once more. “That fellow will rise from crime to crime until he does something very bad, and ends on a gallows. The case has, in some respects, been not entirely devoid of interest.”

“I cannot now entirely see all the steps of your reasoning,” I remarked.

“Well, of course it was obvious from the first that this Mr. Hosmer Angel must have some strong object for his curious conduct, and it was equally clear that the only man who really profited by the incident, as far as we could see, was the step-father. Then the fact that the two men were never together, but that the one always appeared when the other was away, was suggestive. So were the tinted spectacles and the curious voice, which both hinted at a disguise, as did the bushy whiskers. My suspicions were all confirmed by his peculiar action in type-writing his signature, which, of course, inferred that his handwriting was so familiar to her that she would recognize even the smallest sample of it. You see all these isolated facts, together with many minor ones, all pointed in the same direction.”

“And how did you verify them?”

“Having once spotted my man, it was easy to get corroboration. I knew the firm for which this man worked. Having taken the printed description, I eliminated everything from it which could be the result of a disguise—the whiskers, the glasses, the voice, and I sent it to the firm, with a request that they would inform me whether it answered to the description of any of their travellers. I had already noticed the peculiarities of the type-writer, and I wrote to the man himself at his business address, asking him if he would come here. As I expected, his reply was type-written, and revealed the same trivial but characteristic defects. The same post brought me a letter from Westhouse & Marbank, of Fenchurch Street, to say that the description tallied in every respect with that of their employé, James Windibank. Voila tout!”

“If I tell her she will not believe me. You may remember the old Persian saying, ‘There is danger for him who taketh the tiger cub, and danger also for whoso snatches a delusion from a woman.’ There is as much sense in Hafiz as in Horace, and as much knowledge of the world.”