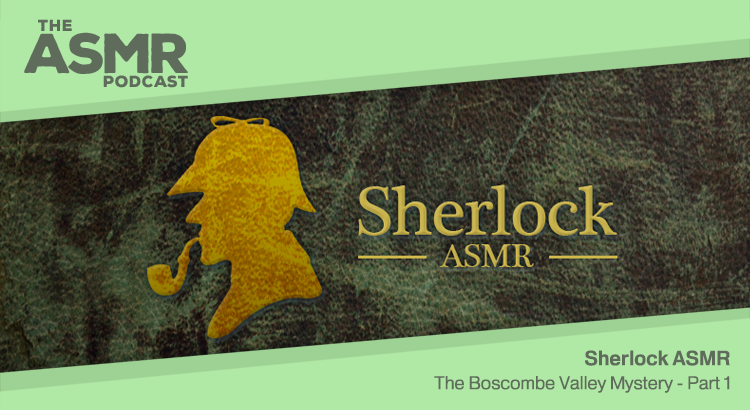 In Episode 69 of The ASMR Podcast we welcome back Sherlock ASMR, who continues his series of whispered Sherlock Holmes readings with the first part of a new adventure – ‘The Boscombe Valley Mystery’.

We were seated at breakfast one morning, my wife and I, when the maid brought in a telegram. It was from Sherlock Holmes and ran in this way:

“Have you a couple of days to spare? Have just been wired for from the west of England in connection with Boscombe Valley tragedy. Shall be glad if you will come with me. Air and scenery perfect. Leave Paddington by the 11:15.”

“I really don’t know what to say. I have a fairly long list at present.”

“Oh, Anstruther would do your work for you. You have been looking a little pale lately. I think that the change would do you good, and you are always so interested in Mr. Sherlock Holmes’ cases.”

“I should be ungrateful if I were not, seeing what I gained through one of them,” I answered. “But if I am to go, I must pack at once, for I have only half an hour.”

My experience of camp life in Afghanistan had at least had the effect of making me a prompt and ready traveller. My wants were few and simple, so that in less than the time stated I was in a cab with my valise, rattling away to Paddington Station. Sherlock Holmes was pacing up and down the platform, his tall, gaunt figure made even gaunter and taller by his long grey travelling-cloak and close-fitting cloth cap.

“It is really very good of you to come, Watson,” said he. “It makes a considerable difference to me, having someone with me on whom I can thoroughly rely. Local aid is always either worthless or else biassed. If you will keep the two corner seats I shall get the tickets.”

We had the carriage to ourselves save for an immense litter of papers which Holmes had brought with him. Among these he rummaged and read, with intervals of note-taking and of meditation, until we were past Reading. Then he suddenly rolled them all into a gigantic ball and tossed them up onto the rack.

“Have you heard anything of the case?” he asked.

“Not a word. I have not seen a paper for some days.”

“The London press has not had very full accounts. I have just been looking through all the recent papers in order to master the particulars. It seems, from what I gather, to be one of those simple cases which are so extremely difficult.”

“That sounds a little paradoxical.”

“But it is profoundly true. Singularity is almost invariably a clue. The more featureless and commonplace a crime is, the more difficult it is to bring it home. In this case, however, they have established a very serious case against the son of the murdered man.”

“Well, it is conjectured to be so. I shall take nothing for granted until I have the opportunity of looking personally into it. I will explain the state of things to you, as far as I have been able to understand it, in a very few words.

“Boscombe Valley is a country district not very far from Ross, in Herefordshire. The largest landed proprietor in that part is a Mr. John Turner, who made his money in Australia and returned some years ago to the old country. One of the farms which he held, that of Hatherley, was let to Mr. Charles McCarthy, who was also an ex-Australian. The men had known each other in the colonies, so that it was not unnatural that when they came to settle down they should do so as near each other as possible. Turner was apparently the richer man, so McCarthy became his tenant but still remained, it seems, upon terms of perfect equality, as they were frequently together. McCarthy had one son, a lad of eighteen, and Turner had an only daughter of the same age, but neither of them had wives living. They appear to have avoided the society of the neighbouring English families and to have led retired lives, though both the McCarthys were fond of sport and were frequently seen at the race-meetings of the neighbourhood. McCarthy kept two servants—a man and a girl. Turner had a considerable household, some half-dozen at the least. That is as much as I have been able to gather about the families. Now for the facts.

“On June 3rd, that is, on Monday last, McCarthy left his house at Hatherley about three in the afternoon and walked down to the Boscombe Pool, which is a small lake formed by the spreading out of the stream which runs down the Boscombe Valley. He had been out with his serving-man in the morning at Ross, and he had told the man that he must hurry, as he had an appointment of importance to keep at three. From that appointment he never came back alive.

“From Hatherley Farmhouse to the Boscombe Pool is a quarter of a mile, and two people saw him as he passed over this ground. One was an old woman, whose name is not mentioned, and the other was William Crowder, a game-keeper in the employ of Mr. Turner. Both these witnesses depose that Mr. McCarthy was walking alone. The game-keeper adds that within a few minutes of his seeing Mr. McCarthy pass he had seen his son, Mr. James McCarthy, going the same way with a gun under his arm. To the best of his belief, the father was actually in sight at the time, and the son was following him. He thought no more of the matter until he heard in the evening of the tragedy that had occurred.

“The two McCarthys were seen after the time when William Crowder, the game-keeper, lost sight of them. The Boscombe Pool is thickly wooded round, with just a fringe of grass and of reeds round the edge. A girl of fourteen, Patience Moran, who is the daughter of the lodge-keeper of the Boscombe Valley estate, was in one of the woods picking flowers. She states that while she was there she saw, at the border of the wood and close by the lake, Mr. McCarthy and his son, and that they appeared to be having a violent quarrel. She heard Mr. McCarthy the elder using very strong language to his son, and she saw the latter raise up his hand as if to strike his father. She was so frightened by their violence that she ran away and told her mother when she reached home that she had left the two McCarthys quarrelling near Boscombe Pool, and that she was afraid that they were going to fight. She had hardly said the words when young Mr. McCarthy came running up to the lodge to say that he had found his father dead in the wood, and to ask for the help of the lodge-keeper. He was much excited, without either his gun or his hat, and his right hand and sleeve were observed to be stained with fresh blood. On following him they found the dead body stretched out upon the grass beside the pool. The head had been beaten in by repeated blows of some heavy and blunt weapon. The injuries were such as might very well have been inflicted by the butt-end of his son’s gun, which was found lying on the grass within a few paces of the body. Under these circumstances the young man was instantly arrested, and a verdict of ‘wilful murder’ having been returned at the inquest on Tuesday, he was on Wednesday brought before the magistrates at Ross, who have referred the case to the next Assizes. Those are the main facts of the case as they came out before the coroner and the police-court.”