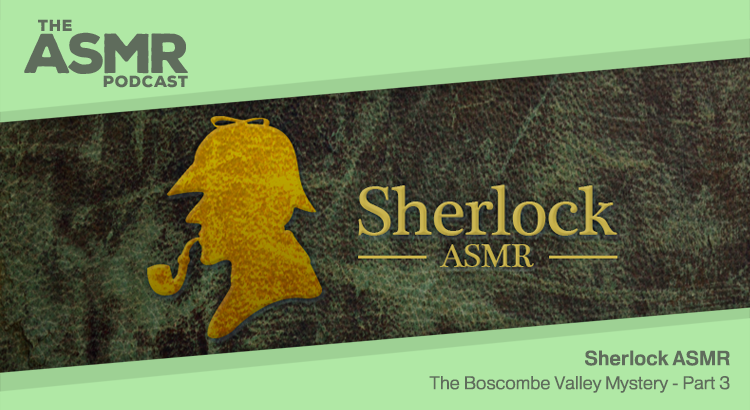 In Episode 71 of The ASMR Podcast we welcome back Sherlock ASMR, who continues his series of whispered Sherlock Holmes readings with the third part of ‘The Boscombe Valley Mystery’.

A conversation ensued which led to high words and almost to blows, for my father was a man of a very violent temper. Seeing that his passion was becoming ungovernable, I left him and returned towards Hatherley Farm. I had not gone more than 150 yards, however, when I heard a hideous outcry behind me, which caused me to run back again. I found my father expiring upon the ground, with his head terribly injured. I dropped my gun and held him in my arms, but he almost instantly expired. I knelt beside him for some minutes, and then made my way to Mr. Turner’s lodge-keeper, his house being the nearest, to ask for assistance. I saw no one near my father when I returned, and I have no idea how he came by his injuries. He was not a popular man, being somewhat cold and forbidding in his manners, but he had, as far as I know, no active enemies. I know nothing further of the matter.’

“The Coroner: Did your father make any statement to you before he died?

“Witness: He mumbled a few words, but I could only catch some allusion to a rat.

“The Coroner: What did you understand by that?

“Witness: It conveyed no meaning to me. I thought that he was delirious.

“The Coroner: What was the point upon which you and your father had this final quarrel?

“Witness: I should prefer not to answer.

“The Coroner: I am afraid that I must press it.

“Witness: It is really impossible for me to tell you. I can assure you that it has nothing to do with the sad tragedy which followed.

“The Coroner: That is for the court to decide. I need not point out to you that your refusal to answer will prejudice your case considerably in any future proceedings which may arise.

“Witness: I must still refuse.

“The Coroner: I understand that the cry of ‘Cooee’ was a common signal between you and your father?

“The Coroner: How was it, then, that he uttered it before he saw you, and before he even knew that you had returned from Bristol?

“Witness (with considerable confusion): I do not know.

“A Juryman: Did you see nothing which aroused your suspicions when you returned on hearing the cry and found your father fatally injured?

“The Coroner: What do you mean?

“Witness: I was so disturbed and excited as I rushed out into the open, that I could think of nothing except of my father. Yet I have a vague impression that as I ran forward something lay upon the ground to the left of me. It seemed to me to be something grey in colour, a coat of some sort, or a plaid perhaps. When I rose from my father I looked round for it, but it was gone.

“ ‘Do you mean that it disappeared before you went for help?’

“ ‘No, I had a feeling something was there.’

“ ‘Then if it was removed it was while you were within a dozen yards of it?’

“This concluded the examination of the witness.”

“I see,” said I as I glanced down the column, “that the coroner in his concluding remarks was rather severe upon young McCarthy. He calls attention, and with reason, to the discrepancy about his father having signalled to him before seeing him, also to his refusal to give details of his conversation with his father, and his singular account of his father’s dying words. They are all, as he remarks, very much against the son.”

Holmes laughed softly to himself and stretched himself out upon the cushioned seat. “Both you and the coroner have been at some pains,” said he, “to single out the very strongest points in the young man’s favour. Don’t you see that you alternately give him credit for having too much imagination and too little? Too little, if he could not invent a cause of quarrel which would give him the sympathy of the jury; too much, if he evolved from his own inner consciousness anything so outré as a dying reference to a rat, and the incident of the vanishing cloth. No, sir, I shall approach this case from the point of view that what this young man says is true, and we shall see whither that hypothesis will lead us. And now here is my pocket Petrarch, and not another word shall I say of this case until we are on the scene of action. We lunch at Swindon, and I see that we shall be there in twenty minutes.”

It was nearly four o’clock when we at last, after passing through the beautiful Stroud Valley, and over the broad gleaming Severn, found ourselves at the pretty little country-town of Ross. A lean, ferret-like man, furtive and sly-looking, was waiting for us upon the platform. In spite of the light brown dustcoat and leather-leggings which he wore in deference to his rustic surroundings, I had no difficulty in recognising Lestrade, of Scotland Yard. With him we drove to the Hereford Arms where a room had already been engaged for us.

“I have ordered a carriage,” said Lestrade as we sat over a cup of tea. “I knew your energetic nature, and that you would not be happy until you had been on the scene of the crime.”

“It was very nice and complimentary of you,” Holmes answered. “It is entirely a question of barometric pressure.”

Lestrade looked startled. “I do not quite follow,” he said.

“How is the glass? Twenty-nine, I see. No wind, and not a cloud in the sky. I have a caseful of cigarettes here which need smoking, and the sofa is very much superior to the usual country hotel abomination. I do not think that it is probable that I shall use the carriage to-night.”

Lestrade laughed indulgently. “You have, no doubt, already formed your conclusions from the newspapers,” he said. “The case is as plain as a pikestaff, and the more one goes into it the plainer it becomes. Still, of course, one can’t refuse a lady, and such a very positive one, too. She has heard of you, and would have your opinion, though I repeatedly told her that there was nothing which you could do which I had not already done. Why, bless my soul! here is her carriage at the door.”

He had hardly spoken before there rushed into the room one of the most lovely young women that I have ever seen in my life. Her violet eyes shining, her lips parted, a pink flush upon her cheeks, all thought of her natural reserve lost in her overpowering excitement and concern.

“Oh, Mr. Sherlock Holmes!” she cried, glancing from one to the other of us, and finally, with a woman’s quick intuition, fastening upon my companion, “I am so glad that you have come. I have driven down to tell you so. I know that James didn’t do it. I know it, and I want you to start upon your work knowing it, too. Never let yourself doubt upon that point. We have known each other since we were little children, and I know his faults as no one else does; but he is too tender-hearted to hurt a fly. Such a charge is absurd to anyone who really knows him.”

“I hope we may clear him, Miss Turner,” said Sherlock Holmes. “You may rely upon my doing all that I can.”