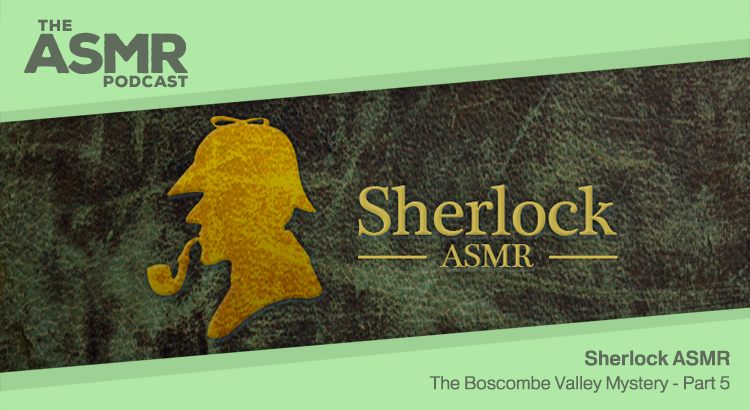 In Episode 73 of The ASMR Podcast we welcome back Sherlock ASMR, who continues his series of whispered Sherlock Holmes readings with the fifth part of ‘The Boscombe Valley Mystery’.

“Ah, thereby hangs a rather painful tale. This fellow is madly, insanely, in love with her, but some two years ago, when he was only a lad, and before he really knew her, for she had been away five years at a boarding-school, what does the idiot do but get into the clutches of a barmaid in Bristol and marry her at a registry office? No one knows a word of the matter, but you can imagine how maddening it must be to him to be upbraided for not doing what he would give his very eyes to do, but what he knows to be absolutely impossible. It was sheer frenzy of this sort which made him throw his hands up into the air when his father, at their last interview, was goading him on to propose to Miss Turner. On the other hand, he had no means of supporting himself, and his father, who was by all accounts a very hard man, would have thrown him over utterly had he known the truth. It was with his barmaid wife that he had spent the last three days in Bristol, and his father did not know where he was. Mark that point. It is of importance. Good has come out of evil, however, for the barmaid, finding from the papers that he is in serious trouble and likely to be hanged, has thrown him over utterly and has written to him to say that she has a husband already in the Bermuda Dockyard, so that there is really no tie between them. I think that that bit of news has consoled young McCarthy for all that he has suffered.”

“But if he is innocent, who has done it?”

“Ah! who? I would call your attention very particularly to two points. One is that the murdered man had an appointment with someone at the pool, and that the someone could not have been his son, for his son was away, and he did not know when he would return. The second is that the murdered man was heard to cry ‘Cooee!’ before he knew that his son had returned. Those are the crucial points upon which the case depends. And now let us talk about George Meredith, if you please, and we shall leave all minor matters until to-morrow.”

There was no rain, as Holmes had foretold, and the morning broke bright and cloudless. At nine o’clock Lestrade called for us with the carriage, and we set off for Hatherley Farm and the Boscombe Pool.

“There is serious news this morning,” Lestrade observed. “It is said that Mr. Turner, of the Hall, is so ill that his life is despaired of.”

“About sixty; but his constitution has been shattered by his life abroad, and he has been in failing health for some time. This business has had a very bad effect upon him. He was an old friend of McCarthy’s, and, I may add, a great benefactor to him, for I have learned that he gave him Hatherley Farm rent free.”

“Indeed! That is interesting,” said Holmes.

“Oh, yes! In a hundred other ways he has helped him. Everybody about here speaks of his kindness to him.”

“Really! Does it not strike you as a little singular that this McCarthy, who appears to have had little of his own, and to have been under such obligations to Turner, should still talk of marrying his son to Turner’s daughter, who is, presumably, heiress to the estate, and that in such a very cocksure manner, as if it were merely a case of a proposal and all else would follow? It is the more strange, since we know that Turner himself was averse to the idea. The daughter told us as much. Do you not deduce something from that?”

“We have got to the deductions and the inferences,” said Lestrade, winking at me. “I find it hard enough to tackle facts, Holmes, without flying away after theories and fancies.”

“You are right,” said Holmes demurely; “you do find it very hard to tackle the facts.”

“Anyhow, I have grasped one fact which you seem to find it difficult to get hold of,” replied Lestrade with some warmth.

“That McCarthy senior met his death from McCarthy junior and that all theories to the contrary are the merest moonshine.”

“Well, moonshine is a brighter thing than fog,” said Holmes, laughing. “But I am very much mistaken if this is not Hatherley Farm upon the left.”

“Yes, that is it.” It was a widespread, comfortable-looking building, two-storied, slate-roofed, with great yellow blotches of lichen upon the grey walls. The drawn blinds and the smokeless chimneys, however, gave it a stricken look, as though the weight of this horror still lay heavy upon it. We called at the door, when the maid, at Holmes’ request, showed us the boots which her master wore at the time of his death, and also a pair of the son’s, though not the pair which he had then had. Having measured these very carefully from seven or eight different points, Holmes desired to be led to the court-yard, from which we all followed the winding track which led to Boscombe Pool.

Sherlock Holmes was transformed when he was hot upon such a scent as this. Men who had only known the quiet thinker and logician of Baker Street would have failed to recognise him. His face flushed and darkened. His brows were drawn into two hard black lines, while his eyes shone out from beneath them with a steely glitter. His face was bent downward, his shoulders bowed, his lips compressed, and the veins stood out like whipcord in his long, sinewy neck. His nostrils seemed to dilate with a purely animal lust for the chase, and his mind was so absolutely concentrated upon the matter before him that a question or remark fell unheeded upon his ears, or, at the most, only provoked a quick, impatient snarl in reply. Swiftly and silently he made his way along the track which ran through the meadows, and so by way of the woods to the Boscombe Pool. It was damp, marshy ground, as is all that district, and there were marks of many feet, both upon the path and amid the short grass which bounded it on either side. Sometimes Holmes would hurry on, sometimes stop dead, and once he made quite a little detour into the meadow. Lestrade and I walked behind him, the detective indifferent and contemptuous, while I watched my friend with the interest which sprang from the conviction that every one of his actions was directed towards a definite end.