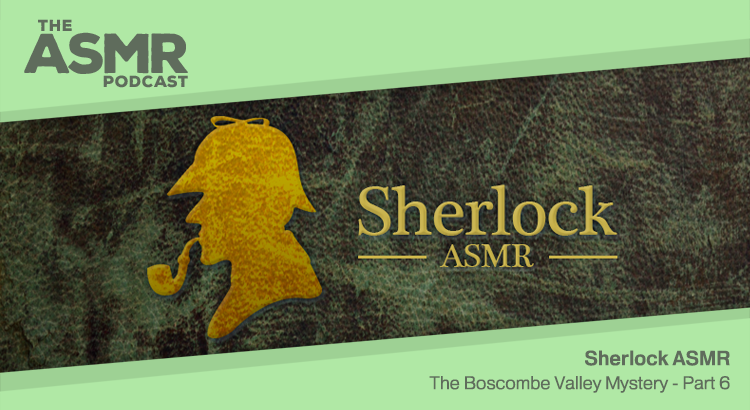 In Episode 77 of The ASMR Podcast we welcome back Sherlock ASMR, who continues his series of whispered Sherlock Holmes readings with the sixth part of ‘The Boscombe Valley Mystery’.

The Boscombe Pool, which is a little reed-girt sheet of water some fifty yards across, is situated at the boundary between the Hatherley Farm and the private park of the wealthy Mr. Turner. Above the woods which lined it upon the farther side we could see the red, jutting pinnacles which marked the site of the rich landowner’s dwelling. On the Hatherley side of the pool the woods grew very thick, and there was a narrow belt of sodden grass twenty paces across between the edge of the trees and the reeds which lined the lake. Lestrade showed us the exact spot at which the body had been found, and, indeed, so moist was the ground, that I could plainly see the traces which had been left by the fall of the stricken man. To Holmes, as I could see by his eager face and peering eyes, very many other things were to be read upon the trampled grass. He ran round, like a dog who is picking up a scent, and then turned upon my companion.

“What did you go into the pool for?” he asked.

“I fished about with a rake. I thought there might be some weapon or other trace. But how on earth—”

“Oh, tut, tut! I have no time! That left foot of yours with its inward twist is all over the place. A mole could trace it, and there it vanishes among the reeds. Oh, how simple it would all have been had I been here before they came like a herd of buffalo and wallowed all over it. Here is where the party with the lodge-keeper came, and they have covered all tracks for six or eight feet round the body. But here are three separate tracks of the same feet.” He drew out a lens and lay down upon his waterproof to have a better view, talking all the time rather to himself than to us. “These are young McCarthy’s feet. Twice he was walking, and once he ran swiftly, so that the soles are deeply marked and the heels hardly visible. That bears out his story. He ran when he saw his father on the ground. Then here are the father’s feet as he paced up and down. What is this, then? It is the butt-end of the gun as the son stood listening. And this? Ha, ha! What have we here? Tiptoes! tiptoes! Square, too, quite unusual boots! They come, they go, they come again—of course that was for the cloak. Now where did they come from?” He ran up and down, sometimes losing, sometimes finding the track until we were well within the edge of the wood and under the shadow of a great beech, the largest tree in the neighbourhood. Holmes traced his way to the farther side of this and lay down once more upon his face with a little cry of satisfaction. For a long time he remained there, turning over the leaves and dried sticks, gathering up what seemed to me to be dust into an envelope and examining with his lens not only the ground but even the bark of the tree as far as he could reach. A jagged stone was lying among the moss, and this also he carefully examined and retained. Then he followed a pathway through the wood until he came to the highroad, where all traces were lost.

“It has been a case of considerable interest,” he remarked, returning to his natural manner. “I fancy that this grey house on the right must be the lodge. I think that I will go in and have a word with Moran, and perhaps write a little note. Having done that, we may drive back to our luncheon. You may walk to the cab, and I shall be with you presently.”

It was about ten minutes before we regained our cab and drove back into Ross, Holmes still carrying with him the stone which he had picked up in the wood.

“This may interest you, Lestrade,” he remarked, holding it out. “The murder was done with it.”

“The grass was growing under it. It had only lain there a few days. There was no sign of a place whence it had been taken. It corresponds with the injuries. There is no sign of any other weapon.”

“Is a tall man, left-handed, limps with the right leg, wears thick-soled shooting-boots and a grey cloak, smokes Indian cigars, uses a cigar-holder, and carries a blunt pen-knife in his pocket. There are several other indications, but these may be enough to aid us in our search.”

Lestrade laughed. “I am afraid that I am still a sceptic,” he said. “Theories are all very well, but we have to deal with a hard-headed British jury.”

“Nous verrons,” answered Holmes calmly. “You work your own method, and I shall work mine. I shall be busy this afternoon, and shall probably return to London by the evening train.”

“And leave your case unfinished?”

“Who was the criminal, then?”

“The gentleman I describe.”

“Surely it would not be difficult to find out. This is not such a populous neighbourhood.”

Lestrade shrugged his shoulders. “I am a practical man,” he said, “and I really cannot undertake to go about the country looking for a left-handed gentleman with a game leg. I should become the laughing-stock of Scotland Yard.”

“All right,” said Holmes quietly. “I have given you the chance. Here are your lodgings. Good-bye. I shall drop you a line before I leave.”

Having left Lestrade at his rooms, we drove to our hotel, where we found lunch upon the table. Holmes was silent and buried in thought with a pained expression upon his face, as one who finds himself in a perplexing position.

“Look here, Watson,” he said when the cloth was cleared “just sit down in this chair and let me preach to you for a little. I don’t know quite what to do, and I should value your advice. Light a cigar and let me expound.”

“Well, now, in considering this case there are two points about young McCarthy’s narrative which struck us both instantly, although they impressed me in his favour and you against him. One was the fact that his father should, according to his account, cry ‘Cooee!’ before seeing him. The other was his singular dying reference to a rat. He mumbled several words, you understand, but that was all that caught the son’s ear. Now from this double point our research must commence, and we will begin it by presuming that what the lad says is absolutely true.”

“Well, obviously it could not have been meant for the son. The son, as far as he knew, was in Bristol. It was mere chance that he was within earshot. The ‘Cooee!’ was meant to attract the attention of whoever it was that he had the appointment with. But ‘Cooee’ is a distinctly Australian cry, and one which is used between Australians. There is a strong presumption that the person whom McCarthy expected to meet him at Boscombe Pool was someone who had been in Australia.”

Sherlock Holmes took a folded paper from his pocket and flattened it out on the table.