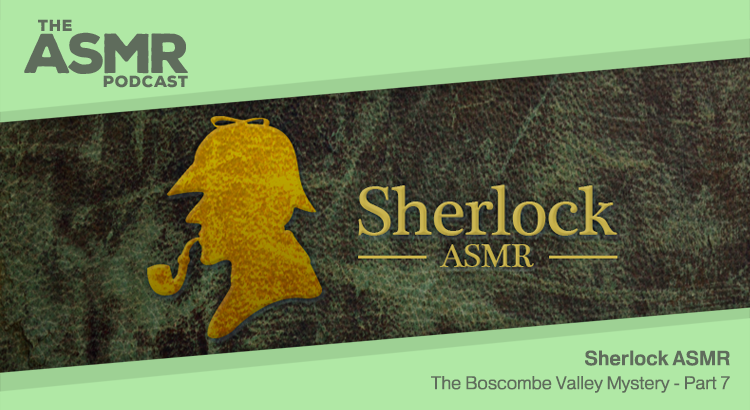 In Episode 78 of The ASMR Podcast we welcome back Sherlock ASMR, who continues his series of whispered Sherlock Holmes readings with the seventh part of ‘The Boscombe Valley Mystery’.

“This is a map of the Colony of Victoria,” he said. “I wired to Bristol for it last night.” He put his hand over part of the map. “What do you read?”

“And now?” He raised his hand.

“Quite so. That was the word the man uttered, and of which his son only caught the last two syllables. He was trying to utter the name of his murderer. So and so, of Ballarat.”

“It is wonderful!” I exclaimed.

“It is obvious. And now, you see, I had narrowed the field down considerably. The possession of a grey garment was a third point which, granting the son’s statement to be correct, was a certainty. We have come now out of mere vagueness to the definite conception of an Australian from Ballarat with a grey cloak.”

“And one who was at home in the district, for the pool can only be approached by the farm or by the estate, where strangers could hardly wander.”

“Then comes our expedition of to-day. By an examination of the ground I gained the trifling details which I gave to that imbecile Lestrade, as to the personality of the criminal.”

“But how did you gain them?”

“You know my method. It is founded upon the observation of trifles.”

“His height I know that you might roughly judge from the length of his stride. His boots, too, might be told from their traces.”

“Yes, they were peculiar boots.”

“The impression of his right foot was always less distinct than his left. He put less weight upon it. Why? Because he limped—he was lame.”

“You were yourself struck by the nature of the injury as recorded by the surgeon at the inquest. The blow was struck from immediately behind, and yet was upon the left side. Now, how can that be unless it were by a left-handed man? He had stood behind that tree during the interview between the father and son. He had even smoked there. I found the ash of a cigar, which my special knowledge of tobacco ashes enables me to pronounce as an Indian cigar. I have, as you know, devoted some attention to this, and written a little monograph on the ashes of 140 different varieties of pipe, cigar, and cigarette tobacco. Having found the ash, I then looked round and discovered the stump among the moss where he had tossed it. It was an Indian cigar, of the variety which are rolled in Rotterdam.”

“I could see that the end had not been in his mouth. Therefore he used a holder. The tip had been cut off, not bitten off, but the cut was not a clean one, so I deduced a blunt pen-knife.”

“Holmes,” I said, “you have drawn a net round this man from which he cannot escape, and you have saved an innocent human life as truly as if you had cut the cord which was hanging him. I see the direction in which all this points. The culprit is—”

“Mr. John Turner,” cried the hotel waiter, opening the door of our sitting-room, and ushering in a visitor.

The man who entered was a strange and impressive figure. His slow, limping step and bowed shoulders gave the appearance of decrepitude, and yet his hard, deep-lined, craggy features, and his enormous limbs showed that he was possessed of unusual strength of body and of character. His tangled beard, grizzled hair, and outstanding, drooping eyebrows combined to give an air of dignity and power to his appearance, but his face was of an ashen white, while his lips and the corners of his nostrils were tinged with a shade of blue. It was clear to me at a glance that he was in the grip of some deadly and chronic disease.

“Pray sit down on the sofa,” said Holmes gently. “You had my note?”

“Yes, the lodge-keeper brought it up. You said that you wished to see me here to avoid scandal.”

“I thought people would talk if I went to the Hall.”

“And why did you wish to see me?” He looked across at my companion with despair in his weary eyes, as though his question was already answered.

“Yes,” said Holmes, answering the look rather than the words. “It is so. I know all about McCarthy.”

The old man sank his face in his hands. “God help me!” he cried. “But I would not have let the young man come to harm. I give you my word that I would have spoken out if it went against him at the Assizes.”

“I am glad to hear you say so,” said Holmes gravely.

“It may not come to that,” said Holmes.

“I am no official agent. I understand that it was your daughter who required my presence here, and I am acting in her interests. Young McCarthy must be got off, however.”

“I am a dying man,” said old Turner. “I have had diabetes for years. My doctor says it is a question whether I shall live a month. Yet I would rather die under my own roof than in a gaol.”

Holmes rose and sat down at the table with his pen in his hand and a bundle of paper before him. “Just tell us the truth,” he said. “I shall jot down the facts. You will sign it, and Watson here can witness it. Then I could produce your confession at the last extremity to save young McCarthy. I promise you that I shall not use it unless it is absolutely needed.”

“It’s as well,” said the old man; “it’s a question whether I shall live to the Assizes, so it matters little to me, but I should wish to spare Alice the shock. And now I will make the thing clear to you; it has been a long time in the acting, but will not take me long to tell.

“You didn’t know this dead man, McCarthy. He was a devil incarnate. I tell you that. God keep you out of the clutches of such a man as he. His grip has been upon me these twenty years, and he has blasted my life. I’ll tell you first how I came to be in his power.